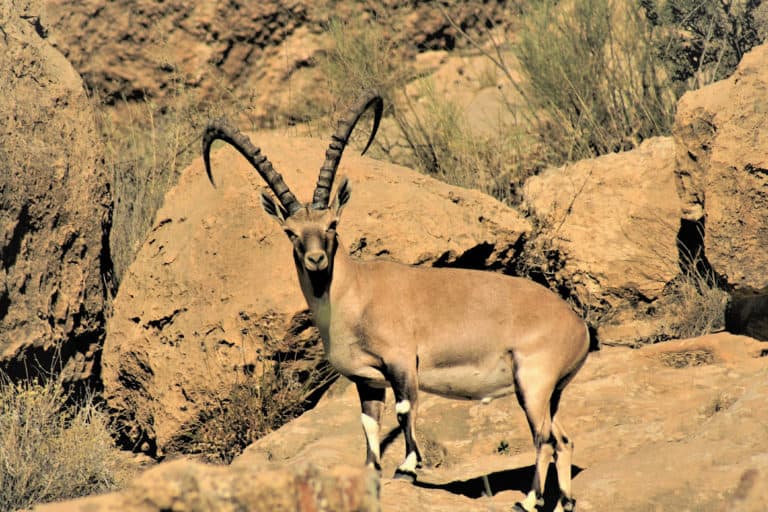 DANA, Jordan — Rugged hills frame a valley surrounded by evergreen oak, pistachio and pine trees in the village of Dana, where stone houses built centuries ago perch on the edge of a canyon that blends into the natural surroundings.

At a crossroads between Europe, Africa and Asia, the Dana Biosphere Reserve is home to Jordan’s most diverse wildlife, spreading from mountains and sandstone cliffs more than 1,200 meters (4,000 feet) high, to desert plains 50 m (164 ft) below sea level.

“I love the peace and quiet here,” says Samia Khawaldeh, who lives in the region and works in the production of local jams, herbal infusions, and handmade crafts sold at the reserve.

But the calmness Khawaldeh values may soon be threatened by the noise of explosions and bulldozers coming to extract the area’s mineral resources. In August, the Jordanian government announced it would expropriate about one-third of Dana reserve’s 300 square kilometers (116 square miles) to allow copper prospecting and extraction, saying there are 45 million tons of the metal within its boundaries.

In 2016, the government signed a memorandum of understanding with Manaseer, a Jordanian oil and gas company, giving the group permission to start prospecting in the country’s oldest and largest nature reserve.

For Jordanian conservationist Ehab Eid, the decision to allow mining in the nature reserve poses a serious threat to the region’s unique biodiversity, undermines decades of conservation efforts, and sets a dangerous precedent.

“Dana is one of the most important refuges for wildlife in Jordan,” Eid tells Mongabay.

With more than 800 different plants and 215 bird species, Dana is home to about a third of Jordan’s flora, almost half of the country’s mammals, and half of all the bird species.

“There are many threatened species in the area,” Eid says. “The [mining] project will completely disrupt the ecological balance and will also have a negative impact on local communities and their livelihoods.”

To extract copper, the company plans to dig a large open pit and blast out and excavate millions of tons of rock. These would then be crushed and mixed with chemicals to concentrate the desired minerals.

“It will change everything here,” Khawaldeh says with apprehension, adding she can’t picture the scenic hills where her family has lived for many generations being turned into piles of waste rock. Since her home and agricultural plot are just a few kilometers from the proposed mining site, she says she worries about the noise, dust and pollution, and fears the mining will cause irreversible damage to the land.

The government has defended the decision to carve out a part of the reserve, saying the mine will create 1,000 jobs and attract hundreds of millions of dollars of investment to a deprived region.

Jordan’s economy has been hit hard by the pandemic, with the unemployment rate spiking to 25%. While many say they welcome new job opportunities, concerns for the environmental costs of mining have grown.

The reserve is run by the Royal Society for the Conservation of Nature (RSCN), which immediately rejected any changes to Dana’s boundaries and said it would take all measures to protect the area.

In a statement, the RSCN said the decision to mine the reserve “is against the basic principles of conservation” and contradicts nature reserve regulations.

A refuge for wildlife

At higher elevations, Dana’s mountains wind past Mediterranean woodlands of juniper, oak and cypress trees. In the lower part of the reserve, acacias dot the desert plains. Because of its mixed biogeographical origins and variation in terrain and climate, the reserve is recognized as an important biodiversity area by UNESCO.

“It’s a very diverse area, with an extraordinary composition of fauna and flora,” says Eid, the conservationist. “It hosts at least 10 threatened species of mammals like wolves, hyenas, ibexes, hyraxes, porcupines and Cape hares, in addition to dozens of endangered birds and plants.

“At a time when we urgently need to preserve nature and biodiversity in face of climate disasters and extreme weather events, we can’t afford to lose more species,” he adds.

Protected areas are crucial in the fight against climate change since they hold a big portion of sequestered carbon. According to Eid, the decision to mine a nature reserve contradicts sustainable development goals and is at odds with Jordan’s commitment to preserve biodiversity and combat desertification.

For Fares Khoury, a professor of biology at the American University of Madaba and co-founder of the NGO Jordan BirdWatch, the reserve is unique and should be off-limits to mining.

“Dana is important for science, for its heritage and for sustainable tourism,” he says. Khoury adds that several threatened birds, like the Syrian serin (Serinus syriacus) and the sooty falcon (Falco concolor), breed in the proposed mining area, which is on a major migration route that connects Europe and Asia with the African continent.

Conservationists say the mining’s constant noise would drive animals away from their few remaining shelters, while the dust and pollution would seriously affect local vegetation and increase soil erosion.

Jibril Ammarin is from the Dana area and works as a ranger at the reserve. He says he worries about the negative impact of the mining on the landscape he has spent many years protecting. But his biggest concern is with the threat the mine poses to the area’s scarce water resources.

A study published this year revealed a deepening water crisis in Jordan, where prolonged and destabilizing water shortages could become commonplace. According to the study, per capita water use could halve by the end of the century.

“Water is the foundation of life here,” Ammarin says. He owns a plot of land outside the reserve where he grows cucumbers, tomatoes and watermelons. Many others in villages around the protected area depend on agriculture for their livelihoods.

To operate, the mine would require millions of gallons of water a day, increasing demand in what is already one of the world’s most water-scarce countries. A potentially more serious problem is the mine leaching acid into water aquifers and farmland, destroying habitats and creating long-term health risks.

“Extraction can result in harmful acids seeping into the water, which can be fatal to wild species in the area,” says Muna Hindiyeh, a professor of environmental engineering at the German Jordanian University and an expert on water management. “The acids can contaminate water for very long periods, even after mining has stopped.”

Studies have found that pollution from metal mines can last centuries or even thousands of years, and so would require treatment in perpetuity.

The discovery of copper in the area isn’t new. The southern part of the reserve, Faynan, has some of the world’s oldest and best-preserved ancient mining sites, dating back to the Stone Age (4,500 B.C.). During the Roman period, around 3,000 years ago, the area had the largest copper mines in the Near East. Because of the lack of modern mining, the region has preserved traces of ancient mining production, which are now part of archaeological sites.

Besides the impact the new copper mine could have on animals, plants and water, concerns are being voiced over the area’s hundreds of archaeological sites, which span from the Paleolithic to the Islamic period.

In an open letter in September, archaeologists urged the government to stop any mining project in the reserve, saying it would destroy a natural gem of “outstanding beauty and cultural heritage.” Instead, they call for excavations of a different kind: to explore and preserve the area’s rich archaeological heritage.

On the tentative list of UNESCO World Heritage Sites, Dana is also a driver of the region’s ecotourism and recreation economy. The reserve attracted 80,000 annual visitors before the pandemic brought the tourism industry to a halt.

“Ecotourism in Jordan started in Dana, it’s a pioneering project that created many job opportunities in the region,” says Mohammad Asfour, an expert on the green economy who visits Dana often to hike and photograph wildlife.

Asfour says that even if the mine created 1,000 jobs, they would be mostly short-lived, since the mine would only operate for about 20 years. Considering the boom-and-bust nature of mining jobs, he says the negative impact on the environment and on the recreation industry would outweigh the mine’s economic benefits.

“The solution needs to be something that will make use of the beauty of the place instead of destroying it,” he says.

According to the RSCN, the reserve employs 85 Jordanians and provides about $3 million annually to local communities. With tourists slowly coming back to Jordan, Asfour says that instead of a mine with a short life span that would leave behind a scarred landscape, sustainable tourism would be a better long-term investment for the region.

But mining is a growing sector in Jordan.

At an international mining conference held in the capital, Amman, in September, the now former minister of energy and mineral resources, Hala Zawati, emphasized Jordan’s “unique opportunities for investment” to an audience of mining company executives, government officials and investors. The minister also said mining would play an important role in the transition from fossil fuels to renewable energy.

Solar panels and wind turbines require a lot of copper, and demand is increasing exponentially. Copper prices rose above $10,000 a ton this month. But experts have warned that in the effort to decarbonize, mining copper and other required minerals could also become a serious issue because of the environmental impact. To mitigate the impact of the copper mine, the government proposed looking for new land to replace the areas due to be mined, and adding that new land to the reserve. But experts say the protected areas are not replaceable, and that carving out a part of the reserve would make it lose its connectivity.

Conservationists and ecologists have also criticized the lack of environmental impact assessments, saying that so far no concrete studies have been made public.

“The mining company published estimates but never shared the results of the studies,” says Amer Al-Rfou’, the Dana reserve manager.

Standing next to the smelted remains of a copper mine thousands of years old in Khirbet en-Nahas, in the south of the reserve, Abdulrahman Ammarin, a ranger who lives nearby, doesn’t hide his anxiety.

“These old mines are still toxic, after so many years, they are still affecting our communities,” Ammarin says while glancing at the ruins littered with dark slag from what was once the region’s largest copper-smelting site.

Ammarin says he hopes this legacy of pollution will serve as a reminder of the need to preserve the land. Like most of those who depend on local tourism and agriculture, he says he fears the devastation caused by mining: blasted hills and contaminated water and soil.

“The reserve must be protected,” he says.

Sumi, L., & Gestring, B. (2013). Polluting the Future: How mining companies are contaminating our nation’s waters in perpetuity. Retrieved from Earthworks website: https://earthworks.org/assets/uploads/archive/files/publications/PollutingTheFuture-FINAL.pdf

This article by Marta Vidal was first published by Mongabay.com on 9 November 2021. Lead Image: A Nubian ibex in Dana Biosphere Reserve. Image courtesy of Ehab Eid.

Mews and Nips: More Than 30 People Helped Rescue a Cat Stuck in a Tree for Five Days
Underfunded but passionate, Native American conservationists call for more support
Don’t know how to select a startup disk on your Mac — we’ve got you covered
Darwin’s Intelligent Design: Raw Food to Support Cats with Kidney Disease
Farmers tempt endangered cranes back – by growing their favourite food