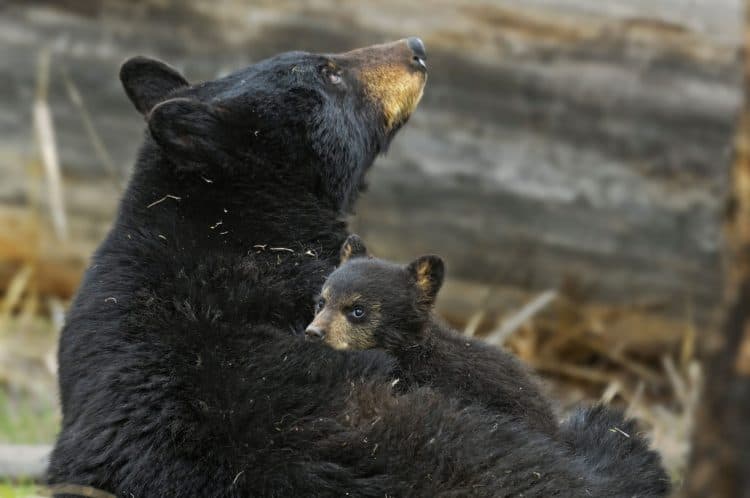 Today, the Washington Fish and Wildlife Commission voted to set aside the 2022 spring bear hunt! The 4-4 vote means that mother bears and their dependent cubs will be protected from trophy hunting at a time when they are most vulnerable. Bears need time to pack on weight and raise their newborn cubs after winter hibernation, rather than being chased down while hungry and lethargic and killed as trophies.

We are deeply pleased that the Commission prioritizes the public’s humane values and the need to avoid cub orphaning over trophy hunting interests and the desire to acquire more heads, hides and claws for display and bragging rights. The vote is a turning point for the Commission, demonstrating its commitment to managing Washington’s wildlife with the best available science. The decision also underscores just how controversial spring bear hunting is because of the great detriments to the bears themselves, including newborn cubs, as well as to other wild animals who depend on this keystone species in their forest ecosystems.

While this vote provides only a stop to the spring bear hunt in 2022, we will continue to work with the Commission and our allies to end spring bear hunting in Washington for good.

Here’s our previous coverage of this issue:

For all of us, fall is a time for winter preparation. For black bears, that means packing on the pounds to build a fat layer robust enough to withstand months of winter hibernation without eating, and even more so for female bears who will birth and care for newborn cubs during their denning season. But black bears are not the only ones looking forward to spring when they can finally emerge from their slumber—trophy hunters are also loading their guns, stocking their bait and readying their hounds for the chase.

A handful of state wildlife agencies in the western U.S. are currently planning their spring black bear hunting seasons, when trophy hunters will be allowed to target bears soon after these iconic and beloved animals emerge from hibernation. When they come out of their dens, black bears are malnourished, lethargic and vulnerable, which makes hunting them at this time exceptionally cruel. Hunters also put newborn cubs at risk of being orphaned, and cubs under nine months (or more) cannot survive without their mother. If a trophy hunter kills a mother bear, her orphaned cubs of the year will die from starvation, predation or exposure to the elements. And in some states, like Washington, Nevada and Arizona, trophy hunters are even allowed to kill the newborn cubs themselves. In the worst iteration of this cruelty, Alaska allows the killing of bears and their cubs while they are still in the shelter of their den.

Even if hunters tried to avoid killing mother bears with nursing cubs, it still happens far too frequently, since a mother bear often keeps her cubs in a tree while venturing off to forage for food. And trophy hunters are notoriously bad at identifying the sex of a bear before the killing.

The Oregon Fish and Wildlife Commission recently approved a proposal to allow spring bear hunting in 2022, authorizing the sale of more than 10,000 bear hunting tags for the spring season. The Washington Fish and Wildlife Commission is currently considering its own 2022 spring bear hunting season, and will vote in November on whether or not to allow it to move forward. And the Arizona Game and Fish Department is currently working on an update to hunt guidelines, including those dealing with spring black bear hunting.

We continue to push back against spring bear hunts and the killing of cubs in states that still allow these exceptionally cruel practices. Black bears should be regaining their strength after months in hibernation and caring for their newborn cubs rather than trying to escape from trophy hunters. Certainly, no hunter can justify the killing of newborn cubs who cannot defend themselves or outrun packs of dogs in states where bear hounding is permitted, such as Arizona and Nevada.

A recent poll conducted by hunting groups shows that a majority of people in western states oppose spring bear hunting. The very least wildlife agencies can do is prohibit spring hunts that tear bear families apart and leave cubs to starve. Most states—even those that allow black bear hunting at other times of the year—prohibit the killing of bears during spring and the killing of cubs. There is no reason the remaining states can’t follow suit. These practices are not supported by public values or science.

If you are a Washington resident, there’s still time to voice your opposition to the 2022 spring black bear hunt to the Washington Fish and Wildlife Commission before they vote on this issue in November.

This article by Kitty Block was first published by A Humane World on 19 November 2021. Lead Image: Mother black bears emerge from their dens in the spring with their newborn cubs. Trophy hunting bears at this vulnerable time is exceptionally cruel. George Sanke/Alamy Stock Photo.

Thinking of Getting a cat?
A hardshell case for your MacBook Pro is protective and stylish
The Electrical Life of Louis Wain
These USB-C hard drives for Mac can back up or beef up your storage
Kitten is Ready to Leave Storm Drain Life with His Brother and Emerges from Hiding One Day